Following on from this post nearly a year ago I thought an update may be of interest. 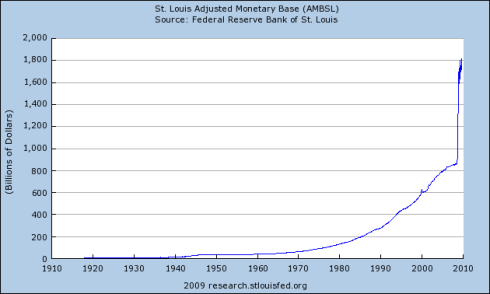 US Money Supply 1910 to Present

Clearly, the situation has not improved greatly since then and the reservations I expressed about this last year are still relevant today – but if this story proves correct it may be that the situation is to be resolved at least in the short run. At least it has not got notably worse.

The thing with the reverse repos, though, is that the money will eventually re-emerge into the systems as the deal(s) unwind, so this is only a temporary cut. Additionally, the paper that the fed would be issuing (if this is correct) will also normally be negotiable, so this is not as real a cut as it looks.

I am not sure if they intend to keep it that way (i.e. eventually allow all of that cash from the unwound repos to go back to the banks) or if they will be looking to unwind the position completely and return the monetary base to trend – i.e. about USD900bn, representing a long term withdrawal of about half of the current amount.

Either way, it looks like the gigantic experiment is set to continue for a little while yet – just with a little pause.

As for Australia – we could, by comparison at least, be said to be models of conservatism in mo

Serious question: Has there ever been a case in history when a central bank, through reverse repos or other means, sucked back more than 20% of base money that they had previously injected during a crisis? Anywhere in the world, in the history of (modern) central banking?

Not that I am aware of.

Hmmm….that’s what I thought. I have never seen a case of base fiat money being sucked out of the system in any great volume after it has been injected in.

I have seen it turn worthless however, and a foreign currency or gold replacing the rejected national currency…Zimbabwe I think now accepts Rand for payment of debt and taxes.

Will we be Zimbabwe or will we be Japan? Tell me if you can…

The bifurcation has started. I just don’t know which side of the bell curve we are going to end up in. But we will end up on one extreme side – deflationary depression or inflationary stagflation. What is simply not possible is steady 3% growth. Those days are gone. The “mean” has been destroyed by FRB and central banking. There is no “mean” anymore.

There is only one extreme. Or the other.

And contrast the clarity, simplicity and calm assurance of North’s writing with this meandering “hit piece” by Phelps.

Phelps “kind of” goes with ABCT and mentions Hayek, but can’t bring himself to mention von Mises or Rothbard or ABCT explicitly. I wonder why?

Phelps give you a deadend. The misery of academic obfuscation.

North gives you the benefit of certainty. “You have contracted lung cancer and have 6 months to live. You can either die without treatment (deflationary depression) or you can die from chemo and intensive medical treatment which will be painful and I think will not in the end succeed (govt stimulus, monetary expansion, Keynesian expansionism). Your case is terminal. There is no hope. You shouldn’t have smoked. You did. It’s over.”

Phelps gets tenure. North is marginalised.

I am the kind of guy that likes North’s simple truths. The economy is f*cked. There is no way out other than depression or hyperinflation. The govt and central banks are filled with duplicitous power-crazed materialistic corrupt blind idiots who couldn’t make it in the real world (which is why they are where they are). Govt and fiat paper has killed the economy. No one knows where the murder weapon is, other than the Austrians.

Phelps gets tenure. And a Nobel prize! I forgot to mention that one. Lesson: If you toe the central bank line, you really do well. So much as whisper FRB is embezzlement and central banking is madness and you end up at Brooklyn Polytechnic teaching a bunch of engineers who have no interest in economics. Like poor (literally) Rothbard.

But eventually you end up with prize and tenure in the Weimar Republic with chaos all around you and looting in the streets.

What do you choose?